Today, we took our puppy for a little nip-tuck of the testes. At just over 4lbs, he’s still a bit small, but the vet assured us he was big enough. So after a day spent worrying, I picked him up from the clinic and here he is, protective cone and all. 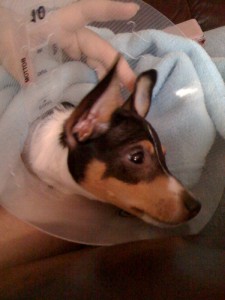 Poor guy. He’s going to be in that plastic headgear for a week, and he’s so little that every time he tries to sniff the ground his cone gets stuck in the snow. It’s possibly the most pathetically cute thing I’ve ever seen. Heartbreaking, but for his long-term good. For the next week, he’ll need to be hand-fed and get his water by straw-feeding, because he can’t get his little face in the water dish.

The vet is also typing up a letter for the breeder, because our not-inexpensive pedigree puppy has bad knees, a geneticÂ anomalyÂ that should certainly have been picked up by the breeder’s vet and that the breeder was mortified to learn about. She offered to take him back, but hell, I’ve got bad knees too and no one is sending me back. We’ll keep him. Instead, she’s offered us a pick from a future litter to make it up to us. We’ll see about that.

This entry was posted in family, life and tagged Tennant. Bookmark the permalink.