I joke about my birthday being cursed.

… well, mostly joke. On or within a week of my various birthdays, 34 of them now behind me, I haveÂ buried my grandfather,Â watched my house burn to ashes,Â suffered through the flu and several gall bladder attacks,Â been *this close* to being arrested due to someone else being drunk and disorderly in my company…

This year, though, has taken the literal birthday cake. On February 13, I lost my sister to a 10 day long struggle with multiple system organ failure. On February 16th, my son very nearly got thrown out of school after being attacked on the school bus by a known bully. On February 18th, my 18 week old puppy broke his right hind leg through the tibia. Here he is with his giant purple cast. He weighs 4.7lbs now. 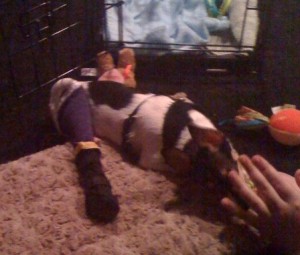 On February 20th, the Cursed Day itself, I gave the first eulogy I ever had to write. And today my family is bandying about talk of lawyers and never speaking to each other again.

I am boycotting February from now on. FML.

This entry was posted in family, life, Miscellany and tagged birthday curse, puppy. Bookmark the permalink.

10 Responses to The Birthday Curse