I picked up a pile of free ebooks after the holidays and have been slowly wading through them. Most have been chucked off my TBR pile after a few lines of badly written prose, but there have been a few exceptions. Even the ones I read all the way through weren’t much to write home about, honestly, but then I stumbled over The Diviners by Julian White. 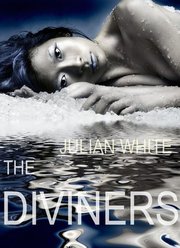 I wasn’t expecting much, to be honest. The title was apparently self-published in electronic-only format. The cover, while not nearly as bad as some I’ve seen, wasn’t terribly well designed. The author’s name blends into the background image, and even the title is a bit hard to read. The blurb that interested me enough to warrant a download at the $0 price point sounded like a bit of a ADD romp into dark fantasy.

I was up late last night, and needed a diversion from a scene that was percolating between my ears, so I opened the Kindle Cloud Reader and started perusing titles. I opened this book at 11:30pm, which was a mistake. Six hours later, I was bleery-eyed and still engrossed. I devoured this novel in an all-night reading marathon reminiscent of my teenage years as a voracious reader. (There’s nothing like watching the sun rise over the pages of a good book.)

The characters were riveting, the horrors grotesque, and the prose palatable, though not as polished as I’d expect from an edited work. That said, I had several major problems with this book.

The format was as attention-deficit inducing as I’d imagined, but it mostly worked for the type of complex, interlaced story this book involved. Where it didn’t work, it didn’t work spectacularly. Notably around the 2/3 mark when the POV suddenly cut to a flashback of a 9th century Papal candidate thinly veiled as some sort of shared memory with one of the protagonists.  Even as much as I was enjoying the book to that point, the full chapter of flashback that didn’t seem to have any bearing on the main story came *this close* to making me write the book off as a dud. Three long-winded scenes, back to back, of Pope-on-a-Stick interlude killed the pacing of the book for me.

The biggest problem I had with this book, though, was a marketing issue. As I said, the description made me think I was getting a dark fantasy, when in reality this title turned out to be a fantastical horror. What’s the difference? Shades of light, really. In even the darkest of fantasy, there tends to be a ray of sunshine, a glimmer of hope, and an at least marginally successful heroic effort at the end. I kept looking for it in The Diviners, but all I ever found was… more darkness. The one slightly positive outcome of the ending was swallowed in the vast, black abyss of what came before and the themes underlined by the depths of horror at the end.

When I dug deeper, I noticed that the author mentions in his bio that he writes Lovecraft-inspired horror, but that was not clear in the description of the piece and the genre wasn’t listed anywhere that I could find on the Amazon product details.

What’s the big deal? It’s just a label, right? Well, wrong. Going into a book, even a riveting book, with certain genre expectations and coming out on the other side with a completely different experience can lead readers to feel let down and unsatisfied (just like me).

In the end, I would recommend this book to readers, but I’d also make the following suggestions to decent/good authors trying to put their work out there without the benefit of an editorial and marketing staff:

—-
As always, I’m looking for suggestions on good books to read. Drop me a line about your favorites in my Reading Room.
This entry was posted in Book review and tagged book review, horror, Indy pub, The Diviners. Bookmark the permalink.