Last night, I did something a bit outside my comfort zone. I tend to avoid fancons, conventions, and author outings. Not that I mind crowds, or even that I am intimidated by authors. It’s more a matter of always having to go by myself that kind of sucks. I mean, is it really worth it to drive 45 miles through sleet and snow to listen to someone talk for an hour and then stand in line for nobody knows how long to have someone scrawl a barely legible signature on a page in a book that I’d have enjoyed just as much without all that?

I don’t know about all signings, or even most signings, but last night, the answer to that question was an unequivocal YES!

Patrick Rothfuss, author of Name of the Wind and the new release The Wise Man’s Fear, did a signing near Dayton, Ohio last night, and it was worth the drive, the weather, the wait, and the crowds. Yes, there were crowds.

Notice the faces peering over top of the book shelves in the back. There were also people trailing down the winding staircases on either side, stuffed 4-folks deep in the standing room only area where I was taking pics from, and tucked in among the shelves with no view of the speaker. 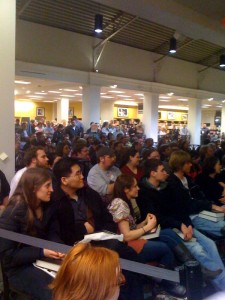 These were taken from my vantage point, behind another shelf of books. I only arrived 30 minutes early and the place was already packed. I got ticket #149 for the signing line, by the way. I talked to a couple of guys who had tickets well into the 200’s. I’d estimate there were about 300 people there in total, if not more.

And here’s Pat himself:

He allowed photos to be taken with him during the signing, but I skipped that, because 150 people deep at after 10pm, the man looked pretty tired and was conjuring up some rather odd expressions in lieu of a smile.

I bought two copies of The Wise Man’s Fear on-site (which in retrospect was a mistake, given that the Books & Co people wouldn’t give you a ticket for the signing line until you had books in hand, and people who showed up with pre-purchased books got to stack 30 deep in the line ahead of me from where I’d have been if I’d brought books from outside the store instead of having to stand in the check out line. Had one just signed, because it was for me and I know who I am. The other to a dear friend of mine in a land far, far away. There was time between the speaking portion and when the line got around to me that I went next door and ate dinner, and still had nearly an hour to work on my own novel while waiting for my number to be called.

The speaking portion of the evening wasÂ phenomenal, hilarious, and worth the sore feet and the cramp in my neck from peering around the humor section sign. The people in the crowd were friendly, bright eyed, and not overly talkative/touchy/invading-spacey. I learned a few tidbits about writing, a few more about telling stories, and four very important lessons:

Pat’s blog can be found atÂ http://blog.patrickrothfuss.com/ and is well worth the read. Unfortunately, it is one of those that screws the hell out of RSS feed readers, so I don’t hit it up as often as I’d like to. My OCD thing coming into play again, there. Can’t stand everything-behind-the-cut stuff in my feed reader.