Yes, I am not dead

So it’s been a busy couple of months since last I tossed a post up. I have a new roommate (Hi, B!) who also happens to be my aunt/adopted-sister. We’re getting along great, though she’s getting that look from me a lot, for over paying the rent I didn’t ask for and for doing too many chores around the house. I’m introducing her to geekdome, starting with a Firefly ep a day. June and July will be for Dr. Who, I think.

B brought along her dog, too, which Â means we now have 3 puppies in the house, although hers is a bit larger and considerably older than my little ones. Apollo, aka Big Dog, is a 9 year old German Shepard who will do his best not to take your arm off with treats, although I hear one should use caution when approaching with turkey in hand. As a retired guard dog, he probably could rip off arms, but he’s gotten to be a little bit of a softy lately. Greebo, my 16lb, 12 year old tom cat, has put Apollo in his place a couple of times already. Hey, I’d be scared of a pissed off Greebo, too. Apollo pics to come! 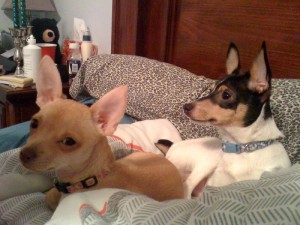 Meantime, here’s some puppy cuteness. Rosie (4 months) has convinced me she’s half mountain-goat. She’s just learned to climb up on my desk and on top of the back of the couch. Tennant (6 months) is still nursing his weak leg a bit, so he’s not climbing yet, but both of them make good imitations of jumping beans when someone comes in the house and they’re stuck behind the baby gates. We’re working on the commands “QUIET” and reinforcing the potty training. Still having accidents everyday from one or the other (or both, boo!), but they’re getting the hang of letting us know when they have to go, go, GO!

On a personal front, I’ve been dealing with some residual grief that was doing its best to scramble my book and put my writing on long-term hiatus. I’m going to be spending the next couple of weeks stitching the poor book back together from the hack job I did attempting to revise it while in mourning, but right now I’m avoiding looking at it by spending all my time in my new sewing room (formerly the dining room). We’ve got two new people-babies on the way in the extended family, and nothing gets me excited about quilting like babies. So far, we’ve done a teddy bear wall hanging, a panel blue Pooh Bear quilt and matching rag quilt, and I’ve bought the fabric for a beautiful pieced quilt in pink, yellow, and green that I’m calling Baby’s Butterflies.

I promised to teach B how to quilt and scrapbook while she was here, and she promised to do something about my gardening-by-neglect landscaping. She’ll be with us through the summer, while we await the arrival of her new granddaughter, but then she’s off to Montana where a tall, dark, and handsome cowboy (literally) is waiting to carry her off into the sunset. Lucky girl!

This entry was posted in family, life, Puppies, Quilting, writing. Bookmark the permalink.

1 Response to Yes, I am not dead