A few weeks ago, I was driving home from the endless errands that fill my days, and the car 5 lengths in front of mine that was going about 40mph was hit by a truck turning left across three lanes of traffic.The elderly gentleman driving was confused and bleeding from several lacerations to his forearm where the airbag had ripped off some skin. I parked my car, grabbed my first aid kit, and tried to get him to sit still. I gloved up, wrapped his arm in a quick bandage to keep him from bleeding everywhere, calmed him down enough that he stopped trying to fish in the floorboard for his hat, and got him to sit still until the ambulance arrived with a backboard and a neck brace.

Under the laws of my state, I am under no obligation to act as a nurse in a crisis situation outside my professional job, but I am protected by Good Samaritan laws if I choose to offerÂ assistance. Because of this, and the fact that I’m a human being incapable of passing by the suffering of others when I can help, I keep a fairly stocked first-aid kit and a fireÂ extinguisher in my car, both of which have come in handy over the years. The fire extinguisher joined the club years ago, after I pulled a woman from a burning car just moments before it became engulfed in flames.

My sister used to work for a rural police department. Sometimes they left her alone with suspects who were locked in the town jail. This meant she had to be certified in first responder stuff – CPR, first-aid, crisis management.

Yesterday, one of her healthy female coworkers who had recently had surgery complained of chest pain, passed out, started convulsing, and eventually stopped breathing. She had blue lips and no pulse.

My sister, who had never used her training for anything more than calling 911 and keeping people calm, took charge of the situation and began CPR.

CPR by itself isn’t usually very effective at saving people, but it can greatly extend the window of time during which critical treatment can be delivered effectively. That means those minutes of CPR can be the difference between a live person and a dead one, or a live vegetable and a normal brain. In this case, the ambulance crew was able to establish a heart rate and take the woman to the hospital for further treatment.

My mother-in-law is a nurse, too. When my husband was a toddler, she used her CPR training to resuscitate him from respiratory arrestÂ twice. Once after he drowned and stopped breathing, and again when he accidentally breathed in a large volume of flour and stopped breathing. Thinking about those situations now, I get the shivers at how close I came to never knowing him.

A couple of years ago, she used those same skills to do CPR – along with another nurse – on a man who collapsed in the aisle of her hometown grocery store. They resuscitated him for more than twelve minutes before the ambulance arrived. It only takes about 5 minutes without CPR for brain damage to occur. The man recovered completely, with his brain function intact, and my mother-in-law still gets grateful cards from his family at the holidays.

First aid, first responder, and CPR training can mean the difference between a good outcome and a bad one, and CPR is not hard to do. Â I encourage everyone to learn CPR – if not from a training class, at least from the internet. Here’s a linkÂ http://depts.washington.edu/learncpr/quickcpr.html. 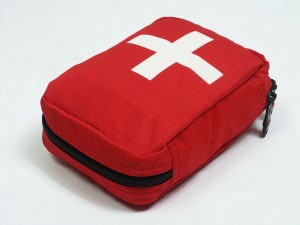 Pro Tips for Handling Crisis Situations
As with just about anything, preparation is the key to success in a crisis. Learning CPR, taking a first-aid class, or just thinking about how you’ll act in a situation all help keep you calm and on task when the crisis shows up. Having supplies like a roll of gauze, a sharp pair of scissors, an a pair of (preferable latex-free) gloves to protect yourself can also increase both your comfort and your effectiveness in a crisis.
This entry was posted in life, Miscellany and tagged CPR, crisis management, Don't Panic, nursing tips. Bookmark the permalink.