When Life Gets Away From You

Did you ever have a day when so many things kept coming up that had to be handled right bloody now that you felt like you were a spinning top the whole day and the things you meant to do, prioritized doing, and actually wanted to do got shelved?

Yeah… that’s basically been my life for the last year and a half.

So here’s an update. Read as much or as little as you want. With any luck, my topsy turvy life will settle down just enough to let me post more often than annually, soon.

Since the last time I posted, I learned that scientists are writers and that writing is a serious challenge for people who are learning to be scientists in general. I can’t tell you guys how very thankful I am for every single piece of writing critique I have received and ever single word I’ve put to the page for the last decade, because it’s all coming in handy in ways I never anticipated it would in this PhD program. I haven’t been working on much in the way of fiction, but I have published three peer-reviewed, first-authored scientific papers in the last couple of months, which is phenomenal for me personally and a pretty darn good place to be starting off with a doctorate (and I’m still two years out from that, at least). I have no intentions of backing off on that productivity now, so there’s a solid chance I could have 6+ publications by the time my dissertation comes off the presses, which is a very big deal in my field, as you can do all the science in the world and nobody benefits from it if you can’t put it out there for others to read.

I’m also leading a writing group for my fellow PhD students at the College of Nursing, with the intent to make writing a little less challenging and scary to folks who haven’t had the benefits of a decade of writing fiction and seriously working on writing improvement in general.

After my last post, I managed to go through a knee surgery, develop an allergy to chicken (seriously, who does that?), and develop the “challenging” form of Hashimoto’s thyroiditis, an autoimmune condition similar to Type I or juvenile diabetes only instead of my FUBAR system attacking my pancreas, it’s going after my thyroid. Usually Hashimoto’s just requires a lifetime prescription of a hormone replacement tablet and late breakfasts, but my form is special because my levels like to alternate between being too low and being OMG TOO HIGH! High is bad. High really, really sucks. This summer, my blood pressure was running in stroke range and everything we did to try to bring it down brought back my tachycardia. I had all of this anxiety that my POTS was going to flare up again and I’d be back to lying flat all day and not having the mental capacity to read two paragraphs without forgetting the content of the first one. I’m pretty sure I wasn’t pleasant to be around for a few weeks there, but I have the best family in the world and they got me through it.

Speaking of family, my kiddo is now 6’3″ tall and has started looking scruffy after a couple of days without a razor. So freaking weird to remember him as a 7lb squirt in swaddling. He’s been a challenge to my husband and I on both personal and parental levels for a while now, but things are getting better. We’re dealing with some health issues he has head-on and trying our best to set him up with all the tools and opportunities for success. My husband is as seriously awesome as he’s ever been. I try not to talk about him too much with the ladies I go to school with though, because he really is perfect (for me) and typical relationships can get kind of touchy when one person is spending 60-80 hours a week doing something like pursuing a PhD. It gets uncomfortable to talk about how wonderfully supportive your spouse is when other people have less pleasant experiences. If I had to list my two best assets for success in this PhD journey, they would be Aaron and writing skill, in that order.

The results are a little more mixed with my extended family, however. Most of them try really hard to be supportive and I can see that, but I also hear constantly how “easy” school is for me (it’s not) and how my accomplishments that were very hard earned were never in doubt – of course I’d get full funding for 3 years from the NIH to do the work that I want to do, of course I’ll get the grant I’m applying for despite the current restrictions on funding, of course I’ll pass my comprehensive exams even if I end up having to plan a spontaneous family reunion, attend a funeral, and return page proofs to demanding editors while I’m trying to study. They mean well and I know it and I deeply appreciate it, but the way they choose to express that support is a real challenge for me sometimes.

Let’s see… when last I posted, I think we were down to three dogs and no cats. We recently had an addition of a fourth furball – Rocket, a 3-5 year old chihuahua mix (probably with a small terrier of some sort). 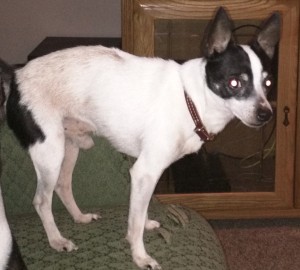 The kiddo and his girlfriend found him roaming around in the park, covered in scabs and lumps, mostly skin and bones and more fleas than dog. We got him cleaned up and to the vet, who has now started him on a second course of antibiotics for the serious infections he had. We’re holding off on vaccines until the infections are cleared, and holding off on neutering and the other two surgeries he’ll need for a couple of months after that because he’s currently not in good enough shape to survive. His skin has healed up, though, and his fur is started to look a little less mangy. He’s even put on a smidgen of weight, though he still looks pretty skeletal. We also did due diligence to find his previous people. No one seems to be looking for him, and it wasn’t as if he was hiding in the park – he came right up to the kids. A week after his finding, he was introduced to our current four-leggers and they’re getting along like family already. Tennant especially is adorable about it, because every morning when we get up, he has to run straight away to Rocket’s crate to make sure he’s still there.

Ok. Time’s a ticking and I have a lot to do today (surprise, surprise). Like I said, I’m hoping to get more time to work on this blog and on the one I mentioned lo those many moons ago for dissemination of science, though I’m considering shifting the focus of that one a bit to deal more with how to write and read science rather than putting the science itself on the center stage. Scientific literacy in our country is so much less than it should be in a society of people who supposedly govern themselves.

This entry was posted in family, In the News, life, Puppies, School, writing. Bookmark the permalink.