I work in an environment where people fear for the lives of their children.Â

Needless to say, a job where people genuinely (and sometimes rightly) are afraid for the lives and well-being of their children, can sometimes be emotionally exhausting. It also allows me to see the full spectrum of human response to situations of unparalleled intensity. As you might imagine, that can come in handy when writing fiction, and since it might also come in handy for the three people who read this blog, I’m going to share a detail-stripped, time-aged story about a young mother.

I worked a night shift a while back, starting at 7pm and ending sometime in the vicinity of 8am, during which a particular parent called me on the phone every three hours to yell at me about something. And I mean yelling. Angry, aggressive, and sometimes downright mean yelling, with not too subtle implications that I was stupid and bad at my job.Â Â 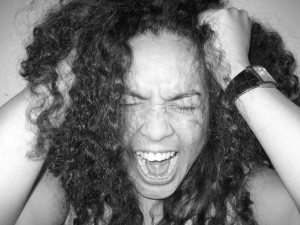 This is not the woman in question. No hair was harmed in the making of this story.

The thing she was yelling about? Her premie wasn’t strong enough to eat all his formula by bottle. In other words, it was nothing anybody (including the baby, me, the doctors, or the mom) had a lick of control over. Premies are small and weak, without the musculature and stamina they need to complete complicated tasks like eating. It just takes time, and there’s nothing to be done about it but have a little patience and keep on doing the things that will support the baby to get stronger.

Now, I could have taken her comments personally, gotten angry, acted passive aggressively, or used my authority to have her put into a position of trouble. Instead, I chose to empathize with her. To realize that she was still a child herself, with few coping skills, no support system, and little experience with the world. To understand that she was anxious about her child and that his failure to eat was making her feel like an incompetent mother, which likely compounded feelings of guilt that she didn’t carry him to term to start with. In other words, I chose to care about her and her situation.Â

My writing pals often say to me that their characters do things that don’t make sense, or that they react in unexpected ways. This, I believe, is an expression of creativity. It is also a symptom of our unconscious understanding that people are much, much more complex than their actions may reveal on the surface. Motivation is an underlying process that drives our actions and character actions, but it helps to remember that not every motivation is going to be transparent to the other characters. What looks to one person like a display of anger might actually be an expression of fear. It isn’t logical, but it is authentic.

People misinterpret each other’s motivations and goalsÂ all the damned time.

Really. It’s a wonder we accomplish anything.

This is one of those things I try to remember when writing, because characters who always guess right about each other, or who display too much empathy (or too little) come off as authorial insertions. They seem to dance to strings rather than genuine motivations. On the other hand, creating that sense of empathy within a reader is the foundation for emotional connection. This is why motivation must be crystal clear to the author, so that we can share it with the reader. Empathy is what makes us care about the characters and the story. As with most of the emotions in a really well written story, this is a battle for the subtext, but it is one well worth fighting, in my (not so) humble opine.

How do you create empathy for your characters among readers, while still making them authentic?

Someone with an external locus of control might not get a breast exam because they figure they’ll get cancer if they’re meant to, because their lives are controlled by destiny, fate, genetics, or God. This allows them to abdicate responsibility for their decisions, to just throw their hands in the air and mutter rather than doing things to help themselves.Â Meanwhile the untreated cancer grows to the point of beingÂ incurable, rather than being detected and treated early, and the person is left to ask “Why me, God?” 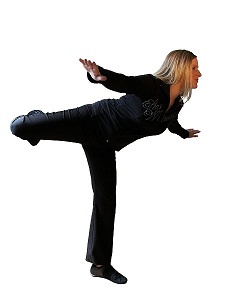 At the extremes, both of these loci have their own benefits and pitfalls, though the external locus of control tends to end in more serious consequences. Most people, I think, fall somewhere in between. The trick, I guess, is to maintain balance. Few events in life are completely outside our control, but some absolutely are.Â
In fiction, few things frustrate a reader than feeling that the protagonist is abdicating control of his or her life to fate, chance, or luck. Still, without an element of divine (or antagonistic) intervention, you end up with theÂ infallibleÂ Mary Sue. Like most things in life, locus of control requires a deft hand and a fine sense of balance.

Living in the Moment

I recently explained to my husband the power and meaning of the phrase “be present in the moment.” Rather than having a mind stuffed full to overflowing with all the future plans and past conversations and mistakes and successes, being present in the moment implies that you are fully attuned to the world around you, experiencing the sensations and noticing the details.

Did you ever have a conversation with someone who kept glancing at his watch? Or notice in the middle of telling a story that the person’s eyes had that sort of glazed, unfocused look that probably meant they were daydreaming rather than listening? Even if the person repeats back every single word to me, it always feels like I was short changed in those moments. Like the person was leaving me only a tiny corner of their consciousness, and spending their best energy thinking about their dental appointment or the project at work, or mulling over what to have for dinner instead ofÂ living that moment with me. It is one of the chief dangers of living a busy life in a busy society. I’m as guilty of this as anyone else.

The scent of cocoa butter, the sounds of nature and Madonna on the tinny boom box, the feel of lake sand between my toes, the stubble of the grass poking up through the worn and tattered quilt we spread under the tallest tree in the state park, the way the sunlight dappled my skin. I can still taste the potato salad from that Memorial Day picnic with my family in 1985.

Some days I wonder if I will be able to remember my adult life at all, when I am old. It blurs on the edges, a slurry of appointments andÂ nuisancesÂ and laundry left too long in the washing machine.

Tomorrow, I will accompany the grandmother who adopted me, Mom, who was always the mother of my heart, to find out the results of her neuopsychological evaluation for dementia. I don’t know the details, but I know the truth. I see it in the way she drifts out of the moment, not from having a short attention span, but because she just vanished for a moment, like a bright fishing bobber being pulled under the current. Tomorrow I will be present in the moment, and there is power in that, though not always joy.

What’s Pink and Sweet and Warm All Over?

A healthy newborn baby, of course.

Step one, on my plan to rule the worl- *cough* – er, I mean to become the greatest newborn nurse in the world has been completed. I finished the NCC nursing specialty certification exam last week with a passing score!

That’s probably not very enlightening unless you happen to be a nurse, so let me es’plain. As soon as the official paperwork arrives, I’ll no longer be signing “RN” after my name. Instead, I’ll be signing “RNC” to indicate that I’m an acknowledged expert in my particular specialty of nursing, which happens to be in the neonatal (newborn baby) intensive care. The test was difficult and exacting, the study was grueling but informative, and the rewards do not involve lavish riches (or even a tiny raise). It will, however, look nice on my application for the PhD program I have my eye on. It’ll also look nice on the plaque they have at work for the few of us who have taken and who maintain this national certification.

This also means that I (in theory) have a bit more free time. In practice, I have more time to devote to the dozens of other tasks on my long-ass list.

How are your plans for world domin– er, self-improvement going?

Busy, Busy, and the Meaning of No

I generally function best when chronically over-scheduled. At least I used to. Right now, I’m struggling a bit to find my center amidst the chaos that I’ve created in my life by taking on a project (or five) too many.

So what am I so busy with?

The FellowshipÂ of the Ring

The fellowship I keep mentioning, in case you were wondering, is a rare opportunity to study at graduate school with all tuition paid and a monthly stipend of $1400-1800 for the first year of your studies. This equals out to be about $25-30k of tuition and cash. It’s offered for two reasons: academic excellence, and diversity. The diversity fellowship applies to diversity for a whole host of reasons including but not limited to ethnic minorities, disabled students, and underserved populations. I have the GPA and credentials to qualify for the academic fellowship if I can pull a 75th percentile or higher score on the GRE. Given my heart condition, I may well be qualified for the diversity fellowship. As you can imagine, I really, really want this fellowship.

Now, qualifications aside, this is a seriously competitive opportunity, split across the entire school’s incoming graduate class. Even meeting all the academic minimums for consideration does not guarantee a win. It’s one of those things where you do the best you can, send in your app on time, and cross your little fingers and toes.

The Meaning of No

What I’m not doing right now:

So yeah, over-scheduled, as always. It could be worse though. What’s keeping you guys busy this autumn?

Posted in family, In the News, life, Nursing, Quilting, School | Leave a comment